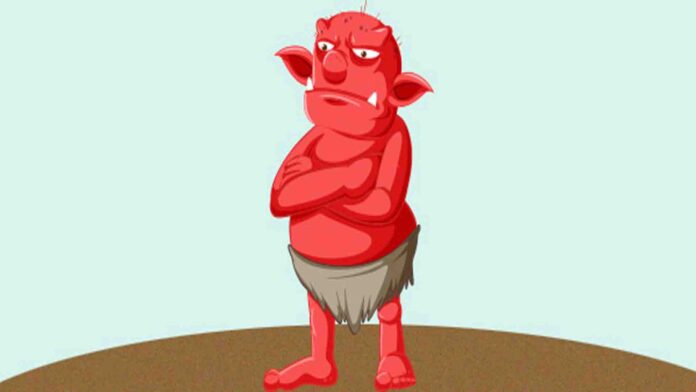 The red ogre a horror stories for kids

Once upon a time there was a red ogre who lived secluded in a huge red hut on the side of a mountain, very close to a village. He was gigantic in size and so scared to everyone that no one wanted to deal with him. The people of the region thought that it was an evil being and a constant threat, especially for the children.

How wrong they were! The ogre was a piece of bread and he was eager to have friends, but he could not find a way to show it: as soon as he went outside, all the villagers began to scream and fled to take refuge in their houses. In the end, the poor man had no choice but to stay locked in his cabin, sad, bored and with no other company than his own shadow.


Time passed and the giant could no longer bear so much loneliness. He thought about the matter a lot and it occurred to him to put a sign on the door of his house in which he could read:

DON’T BE AFRAID OF ME.

I AM NOT DANGEROUS.

The idea was very good, but as soon as he stepped outside to hang it on the doorknob, some kids saw him and ran down the slope in terror.

Desperate, he tore up the poster, crawled into bed, and began to cry bitterly.

– How unhappy I am! I just want to have friends and lead a normal life! Why do they judge me by my appearance and don’t want to know me? …


There was a huge window in the room, befitting an ogre his size. A blue ogre who happened to pass by, heard some moans and cries so sad, that it broke his heart. Since the window was open, he leaned out.

– Well, I’m very sorry. I can’t find a way for people to stop being afraid of me. I just want to be friends with everyone! I would love to be able to walk around town like everyone else, have someone to go fishing with, play hide and seek …

The red ogre wiped away his tears and a shy smile spread across his face.

– Let’s see what you think of the plan !: I’ll go over to the town and start yelling. Logically, they will think that I am going to attack them. When everyone starts running, you will appear as if you are the great savior. We will fake a fight and you will hit me so they think that I am a bad ogre and you are a good ogre who wants to defend them.

– You calm down and do what I tell you! It will be pure theater and you will see how it works!

The red ogre was not very convinced to do so, but the blue ogre insisted so much that in the end, he accepted.

So, just as they had spoken, the blue ogre went down to town and stood on the main street making a bad face, raising his arms and giving some screams that made the hair stand on end even to the bald. People ran in terror through the alleys looking for a hiding place to get to safety.

The red ogre, following the charade, descended the mountain at full speed and confronted his new friend. The fight was a lie, but nobody knew it.

– Damn blue ogre! How dare you attack these good people? I’m going to give you a beating you won’t forget!

And trying not to hurt him, he started hitting him on the back and kicking him in the ankles. It was clear that both were very good actors, because the men and women of the town took the bait. Those who witnessed the fight from their shelters were stunned and swallowed that the red ogre had come to protect them.

– Get out of here, you bloody blue ogre, and don’t come back anymore or you’ll have to deal with me again! Scoundrel, you’re a scoundrel!

The blue ogre winked at him and began to plead:


– Don’t hit me anymore, please! I’m leaving here and I swear I won’t be back!

He got up, made a pained face, and fled by leaps and bounds without looking back.

Seconds later, the square was filled and everyone started clapping and cheering for the red ogre, who became a hero. From that day on, he was considered an exemplary citizen and admitted as one of the community.

His day to day couldn’t be cooler! He chatted happily with the shop owners, played cards with the men of the village, had fun telling stories to the children… It was clear that both adults and children deeply loved and respected him.

He was very happy, there was no doubt, but at night, when he lay on the bed and silence reigned, he remembered the blue ogre, who had sacrificed so much for him.

– Oh, dear friend, what will become of you! Where will you walk? Thanks to your help I now have a wonderful life and everyone loves me, but I couldn’t even thank you.

The red ogre did not get that thought out of his head; He felt that he owed a debt to that stranger who one day decided to help him unselfishly, so one afternoon, he prepared a backpack with food and went on a trip ready to find him.

For hours he climbed mountains and crossed valleys scanning the horizon, until he saw in the distance a cabin very similar to his but painted in indigo.

He took a few strides and reached the entrance, but quickly realized that the house was abandoned. On the door, a note written in Chinese ink and superlative handwriting read:

I knew that one day you would come to thank me for the help I gave you. I thank you very much. I no longer live here, but don’t worry, I’m very well.

I left because if someone saw us together they would fear you again, so the best thing is that, for your sake, I stay away from you. Remember that everyone thinks I’m a terrible ogre!

Continue with your new life that I will seek my happiness in other lands. Good luck and goodbye.

Your friend who loves you and does not forget you:

The red ogre was speechless. For the first time in many years, emotion overwhelmed him and he understood the true meaning of friendship. The blue ogre had been generous, showing that there are always good beings on this planet that we can trust.

With tears in her eyes, she went back the way she had come. He continued to be very happy, but he never forgot that he owed his happiness to the kind blue ogre who had done so much for him.