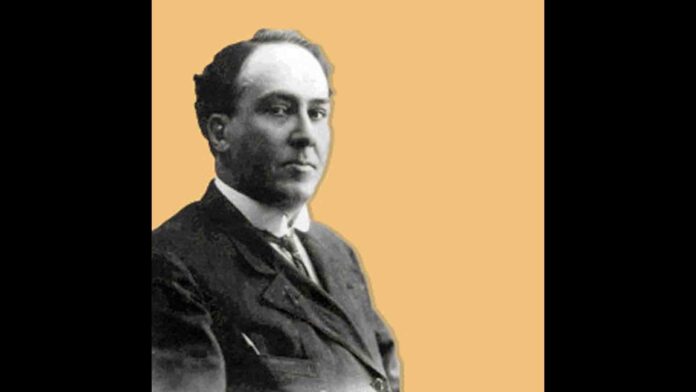 The writer Antonio Machado Ruiz was born in Seville on July 26, 1875. A Spanish poet, playwright and narrator who has become one of the fundamental writers of our literature to the point that it cannot be understood without Machado’s poetry. 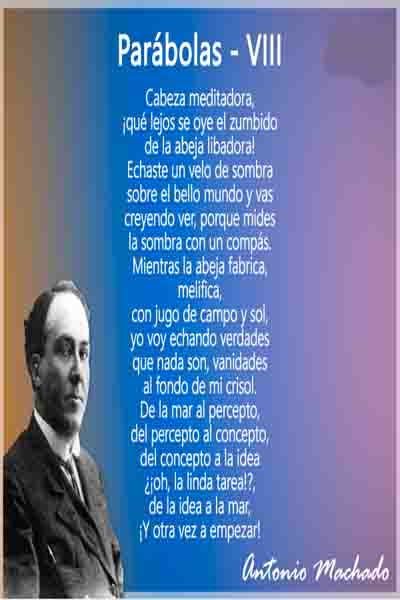 Antonio Machado became one of the emblematic poets of the Generation of ’98 , although his beginnings were clearly modernist. A generation that lived worried about the problems of Spain and that felt a weakness for the work of authors such as Gonzalo de Berceo, Jorge Manrique, Cervantes and Quevedo. They also admire romantic Larra and the enlightened.
The young Antonio, together with his brother Manuel, also a poet, studied at the Institución Libre de Enseñanza and will finish his studies at the Madrid institutes of San Isidro and Cardenal Cisneros. His trip to Paris influenced his life and work because he met Rubén Darío and worked for the Garnier publishing house for a few months.

The writer Antonio Machado reflected in many of his works his early years in Seville and Madrid . A few happy years that influenced his literary career. One of his first collections of poems was Memoria Infantil in which he talks about his childhood. His family, his studies, the figure of his father or his first loves appear in his first poems.


In his first years of literary activity, the writer Antonio Machado participated in the literary and theatrical world of the city of Madrid . He even became part of the theater company of María Guerrero and Fernando Díaz de Mendoza. In 1907 he obtained the chair of French in the city of Soria and left the city.

After making a trip to Paris thanks to a scholarship from the Junta de Ampliación de Estudios to study philosophy with Bergson and Bédier, his beloved wife Leonor passed away . Antonio Machado had been married for only three years and his loss affected him deeply to the point of wanting to leave Soria overwhelmed by his memories.

In 1912 Campos de Castilla was published,  which would change the trajectory of Antonio Machado . The poet speaks of the problems of Castile, its nature and its problems. But it also reflected his feelings towards Spain and the pain over the death of his wife Leonor.

The maturity of the poetry of Antonio Machado

In 1917 Antonio Machado published Poesías completas in which he followed the poetic line marked by Campos de Castilla . A mature work that includes the Leonor cycle with compositions reminiscent of the dead wife and Andalusian-themed poetry appears in which he develops social criticism in an ironic tone .

Machado’s poems in this book can be divided between those that speak of Spain’s problem of the landscape of Castile and its people and his existential problems after the death of Leonor . Discover poems by Antonio Machado from this period.

The writer Antonio Machado requested a transfer to Baeza, a town where he continued to teach French between 1912 and 1919. After these years of solitude, Antonio Machado moved to Segovia seeking proximity to Madrid, a destination to which he returned in 1932. During the years he spent in Segovia he collaborated in the popular university founded in said city .

The last stage of his poetry

In 1924 Antonio Machado published New songs , a work that stood out for the Proverbs and songs . In his poems the influence of popular poetry is noted with brief, essential, short verse metric and assonance rhyme, general linguistic simplicity . Guiomar appears, a new female character, in whom some saw the poet Pilar de Valderrama, although the memory of his beloved Leonor is still present.

In 1927 the writer entered the Royal Academy and during the twenties and thirties he wrote theater in collaboration with his brother Manuel . In 1932 Antonio Machado returned to the city of Madrid.

During the Civil War Machado was not in Madrid, as he was evacuated to Valencia in November 1936 . In those years the writer Antonio Machado was participating in republican publications in which he tried to make a literary campaign. He also collaborated in Hora de España and attended the International Congress of Writers for the Defense of Culture.

In 1939 the writer Antonio Machado went to Barcelona, ​​from where he crossed the Pyrenees to Coillure . Sadly, he died in this French town shortly after his arrival and could no longer return to Spain.